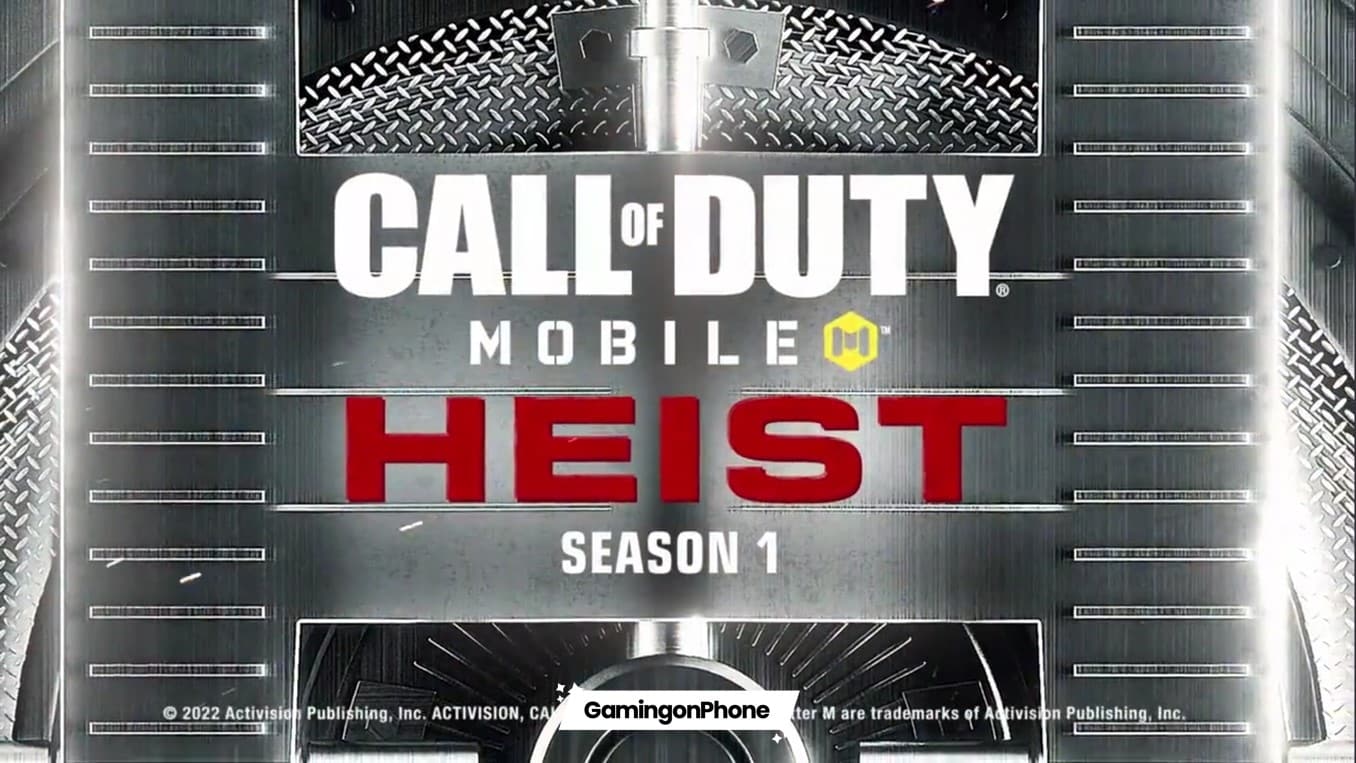 Call of Duty Mobile is getting ready to start a new era with the first patch of 2022. After 12 seasons spanning across 2021, it’s time for a new beginning with the COD Mobile Season 1: Heist update in 2022. Activision has already announced that the next season won’t be called Season 12. Instead, it will be simply named Season 1: Heist. As explained by developers, this name refresh will apply to all seasons and Ranked Series going forward in 2022. So without further ado, let’s go over the details to look forward to with this major holiday update.

During Season 1 2022, players will have the opportunity to earn 50 new tiers of Battle Pass rewards. The Heist update includes a fresh supply of free and premium content, including new operators such as Yuri-Bratok and Makarov-Kingfish, the new functional weapon – the PPSH-41, a new scorestreak, Weapon Blueprints, Calling Cards, Charms, COD Points (CP), and more launching throughout the season.

The new Battle Pass will be available from January 21st, 2022  at 8 AM PDT (tentative) alongside the rest of the update. This battle pass, just like the previous battle passes will consist of four epic characters and some epic weapons.

A new Scorestreak named Storm Ball will now be playable in the COD Mobile Season 1 2022. The Storm Ball is a new tactical grenade that functions as a smoke grenade but deploys a shroud of smoke that makes it hard to see anything inside, but players can see just fine inside the hemisphere of smoke.

Kilo 141 is one of the several fully-automatic assault rifles with a longer optic to bolster head-shot effectiveness. This weapon gives a modest damage output with an average firing rate and convertible drum magazines.

The Kilo 141 is one of the several fully-automatic assault rifles usable by the player and is unlocked alongside custom loadouts at rank 4. It features a 4 to 6 shot kill to the body, which is average for the class. This combined with the 751 RPM fire rate gives the Kilo a modest damage output.

It also comes with fairly controllable recoil, average ADS and moves speeds, and a solid reload speed. These well-rounded stats make the Kilo a flexible assault rifle over a variety of ranges.

PPSh-41 is a low-precision SMG with a large drum magazine. Take advantage of this weapon’s hip firing advantage to charge into your enemies!

The PPSh is a submachine gun that has a very high magazine capacity, decent power, and only medium recoil. It takes just two bullets to kill one enemy in a single-player, but its fairly high rate of fire when fired automatically makes it more effective against grouped targets, rather than individual ones.

This gun is much less effective, as it takes four shots to kill one enemy, twice as many as before, but otherwise identical and still a versatile weapon for close quarters and moderately long distances.

The new Series starts from January 2022 and will end in the month of March 2022. Here are the rewards that players will get throughout the new ranked series.

This one is yet another visually pleasing map set in a large vineyard in Spain. It was first introduced in Call of Duty Black OPS 4. It is quite a large map that shares the swimming feature with Icebreaker. This luxurious vineyard estate is located alongside the riverbanks. While the lake seems peaceful, enemies may emerge from the water. It is critical to cautiously plan out your strategy before you take action!

A Nuketown reskin, this map is set in the night and might be one of the most beautiful looking Nuketown renditions we’ve seen in a while with cool-looking lanterns and neon signs lighting up everything. Patrol under red lanterns, and take a tour around the traditional Chinese buildings, Nuketown Temple is the perfect place to visit in this festive season. While you have fun, don’t miss the fireworks show at night!

To score a victory in Heist Mode, the team who is richest wins! Spread out your team to loot gold coins from safes and purchase battle equipment to destroy the enemy team.

Payout Search and Destroy joins ranked Multiplayer for a limited period of time. Grab the deadliest weapons in-game to defeat your enemies!

Join in on this festive season and engage in a 10v10 battle in the Red Envelope Confirmed! These red envelopes are full of surprises. Let’s see who comes out on top in collecting them all!

In the Tunisia map, the skylights in the wine cellar have been updated where now players can throw various props through the skylights.

QXR is relatively balanced after the previous adjustments, however, there are still other preferred weapon choices that come with a better burst, endurance, and continuous outputs. To help QXR gain an upper hand, we have slightly amplified its burst damage in close range. The damage of QXR at 16-25M and mid-to-long firing range are also slightly increased.

The long reload time of AMR has always been one of its shortcomings. Devs have shortened the tactical reload and the empty reload time to optimize the overall handling.

The advantage of PP19 lies in its long-range and reliable TTK. The initial damage of PP19 in close quarters can achieve a lethal outcome, however, TTK appears to be inadequate when confronted. Devs have increased the damage ratio of PP19 hitting the head and chest in the first quarter range. Two consecutive shots to the head or one shot to the head and two shots to the chest can eliminate the enemy, thereby slightly increasing the upper limit of it.

As DR-H’s damage scales negatively with its range, a great advantage through precise shooting in the first two-quarters of shooting range can be achieved. In the past few adjustments, the bullet spread of DR-H has been reduced to help players better hit the target.

However, due to its smaller magazine drum and shorter firing range, other alternative weapons under the same TTK were preferred by players. Therefore, devs have retained the characteristics of precise hits, slightly increase the distance of close-mid range, and reduce the reload time.

D13 Sector is an intriguing secondary weapon when used in confined areas. We hope that the characteristics of ricocheting discs can bring surprising outcomes to the game.

When will COD Mobile Season 1 2022 start

We hope you find this COD Mobile Season 1 2022 about the NIghtmare update article helpful. Then, please feel free to ask any questions in the comments section below, we’ll make sure to reply to everyone.

Scroll back to top